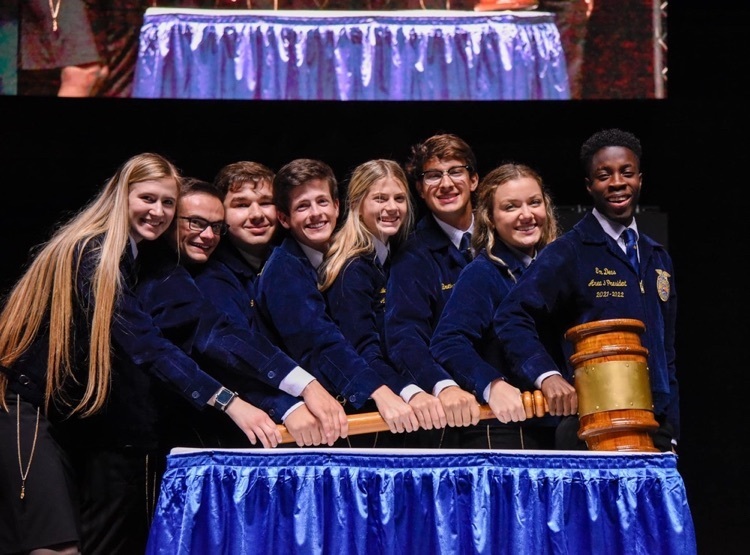 CALHOUN, GA – Bethany Champion, a member of the Sonoraville High School FFA Chapter has been selected as the Northern Region State Vice President for 2022-2023.

Champion is the first student from Sonoraville High to serve as a State Officer and just the second student from Gordon County Schools to earn the honor.

Champion and the eight newly elected officers were standouts from the 18 candidates vying for the honor. Candidates take part in an extensive interview process with the State FFA Officer Nominating Committee leading up to the selection.

Bethany, who found her passion for FFA joined the organization when she entered sixth grade at Red Bud Middle School. Her RBMS advisor, Rebecca Macedo, encouraged Bethany to become an involved member of the school-based agricultural education program. After attending her first State FFA Convention during her seventh-grade school year, Champion set her sights on one day becoming a state officer. To reach her goal, she has actively sought-after ways to develop her leadership and service skills, including serving as an Area Officer for Area 1.

When asked what she is looking forward to about serving in her new position, Champion said, “I am really looking forward to meeting students across the state of Georgia. We have over 77,000 members statewide, and that means there are 77,000 smiles, stories, and personalities. If it hadn't been for leaders in FFA encouraging me to get involved, run for Area Office, and attend events, I wouldn't be where I am today. I hope to have a similar impact on other students.”

The mission of FFA states that “FFA makes a positive difference in the lives of students by developing their potential for premier leadership, personal growth, and career success through agricultural education.” Champion stated that this statement has been a true testament to her career as an FFA member. Over the course of her FFA career, she has had the opportunity to participate as a National FFA member; attending the National FFA Convention where she competed and earned first place in the National Agriscience Fair, student workshops, and leadership conferences that have helped to shape who she is today.

Upon her graduation from Sonoraville High School, Champion plans to attend school at Berry College and earn a degree in Animal Science with a minor in Communications. Outside of her time as an FFA member, Bethany is also a member of BETA Club, the National Technical Honors Society, and will graduate as the Salutatorian of her class.

Throughout her year of service on the state level, Champion will serve the 77,000+ FFA members across the state of Georgia. She will also attend conferences, conventions, trainings, and other various events throughout the year.

Gordon County Schools system serves around 6,500+ students in schools across the county including six elementary schools, two middle schools, and two high schools. The mission of the Gordon County School system is to build a collaborative culture that engages all students and staff in learning experiences leading to growth, empowerment, and transformation.